Difference between revisions of "Socio module"

In this area only some statistics were performed based on the virtual society model developed in the Virtual Society section.

Below are some basic numbers and statistical information concerning Poland.

The administrative hierarchy of Poland is the following. The highest level belongs to voivodeship, which, following the European Nomenclature of Territorial Units for Statistics (NUTS) is classified as NUTS-2. There are 16 voivodeships in Poland. Second level constitute about 380 poviats (NUTS-4). The lowest level in the NUTS hierarchy is a commune (NUTS-1). There are about 2500 communes in Poland. There are several types of communes, but basically only three appear in Poland: 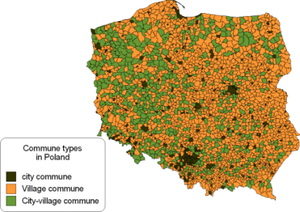 Most of the results presented here will be given in communal or poviat resolution.